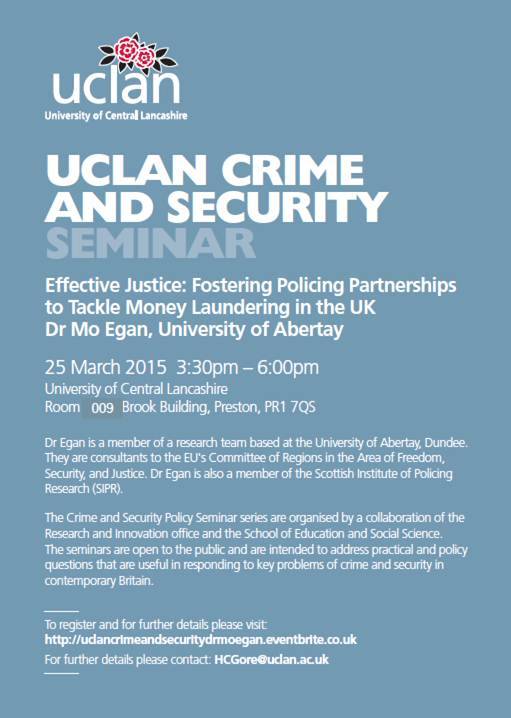 
The Crime and Security Policy Seminar Series is organised in the School of Education and Social Science at the University of Central Lancashire. It is intended to provide a forum to share information about the latest research on issues in crime and security. Topics in the series include hate crime, organised crime, young people and violence and financial crime. The seminars are open to the public and are intended to address practical and policy questions that are useful in responding to key problems of crime and security in contemporary Britain.

Dr. Egan is a member of research team based at the University of Abertay, Dundee, who has been appointed consultants to the EU's Committee of Regions in the Area of Freedom, Security, and Justice. She is also a member of the Scottish Institute of Policing Research (SIPR)

This paper builds on doctoral research which examined the policing of money laundering. One of the significant findings of the underpinning research was recognition of the role of private sector organisations as partners in the implementation of policing financial crime (Harvey, 2004, 2005, 2009; Verhage, 2009; Egan, 2010). Within the anti-money laundering framework there are broadly three accountability mechanisms that prevent private sector collusions in money laundering offences. The first is the requirement to submit a suspicious activity report to the National Crime Agency. The second is the creation of an offence of failing to report, and the third is the sanctioning power of supervisory authorities. Still, the private sector’s role demonstrates the negotiation of justice with the state’s ability to outsource aspects of policing on the one hand, and the vested interest of controlling access to intelligence and evidence by private sector participation, on the other. Taking the case of the legal profession, this paper will focus on the role of supervisory authorities in this framework and examine to what extent they influence its development and implementation.

Community development is a way of strengthening civil society by prioritising the actions of communities, and their perspectives in the development of social, economic and environmental policy. It seeks the empowerment of local communities, taken to mean both geographical communities, communities of interest or identity and communities organising around specific themes or policy initiatives. It strengthens the capacity of people as active citizens through their community groups, organisations and networks; and the capacity of institutions and agencies (public, private and non-governmental) to work in dialogue with citizens to shape and determine change in their communities. It plays a crucial role in supporting active democratic life by promoting the autonomous voice of disadvantaged and vulnerable communities. It has a set of core values/social principles covering human rights, social inclusion, equality and respect for diversity; and a specific skills and knowledge base.