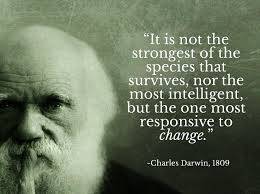 
~They say that laughter is the best source of medicine. Granted, it certainly is especially if your mood is low or your having trouble opening up about matters close to your heart.

Renowned theorist Charles Darwin had many works on the subject of evolution. His third book ‘ The Expression of the Emotions in Man and
Animals’ published in 1872 dealt with the biological aspects of emotional life. He developed the concept of behavioural genetics, and explores the origins of such human characteristics as the lifting of the eyebrows in moments of surprise and the mental confusion which typically accompanies blushing. This reveals to the reader that Darwin had great insight into emotional intelligence and how he studied the emotional response to embarrassment and even laughter.

On Monday February 12th 2018 as part of the Darwin Day Celebration Lecture you can watch an engaging discourse taken from Darwin’s third book as well as an exploration of laughter in general :-  The Expression of the Emotions in Man & Animals: The Story of Laughter by Professor  Sophie Scot.

Sophie is a Psychologist and Neuroscientist who specialises in speech, communication, emotions and laughter. She’s also from Lancashire, she’s a stand-up comedian and she was the 2017 Royal Institution Christmas Lecturer so you may have seen her on TV in the last few weeks.

The evening will commence at 6pm with refreshments in the Darwin Lecture Theatre, Darwin building. The lecture will take place from 7pm-9pm.

You can book your place by visiting www.uclan.ac.uk and follow the link to the what’s on at uclan guide for February 12th. This is going to be a great night so book early!

Darwin’s final work  was the 1881 book   The Formation of Vegetable Mould, through the Actions of Worms . He developed the study of earthworms and their effect on soil. Since his death in 1882 his works have  long been in the curriculum of Primary, Secondary, College and University classrooms. He has been described as one of the most influential figures in human history, and he was honoured by burial in Westminster Abbey.

Professor Sophie Scott will reflect on the more light hearted side of Darwin’s persona. You can view a 4 minute video via You Tube in which Sophie explains ’How we Learn to Laugh’.

The Expression of the Emotions in Man & Animals: The Story of Laughter
by Professor Sophie Scott